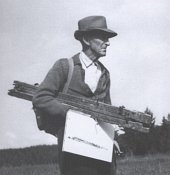 One of the most distinctive painters of the Vysočina region, Josef Jambor was born in Pohledec u Nového města na Moravě as the son of a cart-wright.

He graduated from the Nové Město na Moravě school, and despite wanting to study at the Academy of Fine Arts in Prague, he instead found work as a land surveyor – in accordance with his parent’s wishes. It was only later, in 1914, the he entered the gates of the Academy, where he studied until 1919 under Professors Loukota, Bukovac and Švabinský. After his studies he became a printmaker, but took little interest in this method of work. He instead directed his artistic focus to landscape painting, which became the lifelong subject of his art.

After graduating from the Academy he travelled extensively, gaining new ideas and insights for his work, visiting Dalmacia, Germany, The Netherlands, and mainly Italy.

After his return he lived in Prague, later in Nové Město na Moravě, and from 1931 onwards in Tišnov, where there is a permanent exposition of his work installed in his former home.

He found the countryside around Nové Město na Moravě to be an endless source of inspiration, and sought to capture it with realistic precision and in it’s typical colours. In the last decade of his life he gravited not only towards simple countryside motifs, but primarily to wide panoramatic views, succeeding in capturing the region’s mood and character, which he knew well.