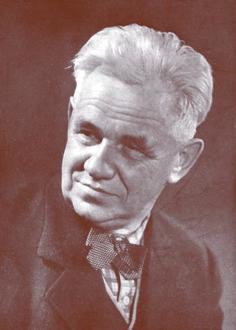 Alois Podloucký was born in Žďár nad Sázavou in 1890. He grew up in an artistic environment, surrounded by the work of his father, who was a cabinet-maker and woodcarver. It was his father who noticed his artistic talent, and sent him away to study at the private arts school of Professor Schaefer in Vienna in 1907. After two years he left Vienna for Prague, where he studied figural painting at the Academy of Fine Arts under the guidance of professors Vlaho Bukovac and František Ženíšek. During his studies he got acquainted with significant artists Mikoláš Aleš, Jan Štursa and Oldřich Blažíček, all of whom greatly influenced his life and work. Shortly after succesfully completing his studies, World War I broke out, and he was drafted into the 81st infrantry regiment, where he became a member of the regiment’s art group.

After the war he became a teacher, first working in Jihlava and later Uherské Hradiště before finaly settling down in Nové Město na Moravě, where he taught for thirty years. During this time he fully engaged himself in the social life of the town, being an active organiser of cultural events, a member of several local cultural organisations such as the Smetana Choir and the Horák theater group, and also playing a significant part in the establishment of the Museum of Horácko.

In his work he focused mainly on landscape painting, finding inspiration in the countryside of his home region of Vysočina, which he depicted in all of it’s various changes throughout the seasons. Of note are also his still lifes, most often floral, and portraits. His style is characterized by technical brilliance, excellent draftsmanship, and a distinctive colour palette. In amongst his landscapes, church interiors, still lifes and portraits, is also work depicting such subjects as nightime streets and railway stations.

Alois Podloucký was not only a painter, but also an amateur photographer. His work is special in that it captures ordinary day-to-day life in the first half of the 20th century during a time from which many photos of Vysočina were not preserved. Being a painter he was also imbued with a sense for composition and lighting. A number of his paintings were made on the basis of photographs, most often however he painted plein air.