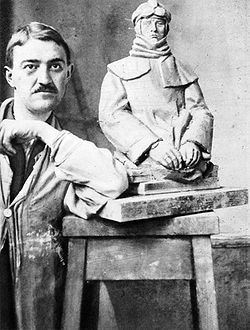 One of the founders of modern Czech sculpture, Jan Štursa was born on the 15th of May 1880 in Nové Město na Moravě. He studied at the sculpture and masonry school in Hořice, which provided him with a good basis for his craft and a love for stone, which, along with bronze became the primary materials he would use for his work. He graduated from the Hořice school in 1898 with excellent results, and soon after travelled to work in Germany. In 1899 he was accepted to the Academy of Fine Arts in Prague into the studio of professor Josef Václav Myslbek.

Even his earliest work at the Academy showed great talent and his female nude From the spa (Z lázně) (1903) took Myslbek’s interest to such an extent that he had it cast and displayed at the rectorate. In 1904 Štursa was awarded a stipend for a three-month journey around Germany, Switzerland, France, England and The Netherlands, surviving sketches from which demonstrate the importance of draftsmanship to his work.

After graduating from the Academy in 1904 he worked in his studio in Na Maninách, Prague, where, under the influence of symbolism and art nouveau, he sought to capture the internal life of man ( Life flees (Život uniká) (1904), Pubescense (Puberta) (1905), Melancholy girl (Melancholické děvče) (1906). It was in this period that he created the sculpture Song of the Heights (Píseň hor) (1905) for the Nové Město fountain, which was supposed to be, in his own words, “A reminder of the vanishing peculiarities and customs of the region”.

From 1908 until the start of the First World War he worked at the Academy as Myslbek’s assistant, a common subject of his work from this time being the mature female form (Eve (Eva) (1908), Sitting Eve (Sedící Eva) (1908 – 1909), Sulamit Rahu (1910), Toileta (1910). Among the most extraordinary pieces from this period are two sculptures made for Prague’s Hlávkův most: Humanity (Humanita) and Industry (Práce) (1912 – 1913). Displayed in the exhibition is a unique study Self-portrait (Autoportrét) (1912) for the sculpture Industry (Práce).

During the First World War he served in the 81st regiment, first in Jihlava and later on the eastern front at Halič, before being bestowed a professorship at the Academy in 1916 freed him from his millitary obligations. Initally he led the medalion crafting school before becoming Myslbek’s successor in 1919. In 1922 he became rector of the Academy, a position he held until 1924. In pieces from this period such as Memorial for the fallen (Pomník padlým) (1918) or Wounded (Raněný) (1921) he sought to come to terms with his harrowing experiences from the war. In the last few years of his life he concentrated mainly on portraiture, including: Max Švabinský (1918), Hana Kvapilová (1918), T.G. Masaryk (1920 till 1921), Alois Jirásek (1921), Leoš Janáček (1924), Božena Němcová (1924) and Bedřich Smetana (1924). It was also in this period that he created one of his major works Gift of Heaven and Earth (Dar nebes a země) (1921), which to Štursa signified a release from the anquished memories of war.

On the 28th of April 1925, shortly after Gift of Heaven and Earth was ceremonially installed in the Modern Gallery in Prague’s Stromovka, Štursa ended his own life. He was laid to rest in the Vyšehrad cemetery.

Jan Štursa was not only an exceptional artist, but also an important teacher. At the Academy he fostered a whole generation of sculptors, collectively known as the Štursa school.

Works by Jan Štursa located around the town:

Song of the Heights (Píseň hor) (1905) – on the fountain on Palackého náměstí, the original is located in the vestibule of The Museum of Horácko

Reliéf Salvátor Mundi (1905) – above the original entrance to the pharmacy on Vratislavovo náměstí house no. 119