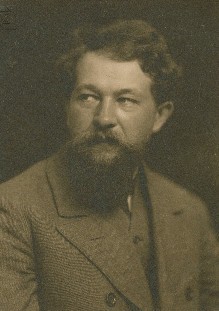 Josef Mařatka’s family lived in Prague’s Žitná ulice in the same town-house as the family of composer Antonín Dvořák. Josef himself struggled to choose between focusing on music or visual art, in the end devoting his life’s work to scultpure.

In the years 1892 – 96 he studied under Josef Václav Myslbek at the Academy of Arts, Architecture and Design in Prague and in 1896, together with his professor, he moved to the Academy of Fine Arts, and continued in his studies there. After graduating from the Academy he travelled to France in 1900, where he worked in the studio of August Rodin, whose art had a profound influence on Mařatka’s style. His early pieces were created in the spirit of Myslbek’s idealism, but under the influence of Rodin his work took on a more dramatic bent (Mother (Matka) 1903).

Near the end of 1908 he received an honorary function in the newly emerging Gallery of sculpture and in 1909 granted the gallery his plaster sculptures and consented to their reproduction in the stone sculpting school. These sculptures were Abandoned Ariadna (Opuštěná Ariadna), which is counted among his most important works, and the design of a memorial for actress Hana Kvapilová.

In the years 1908 – 1911 he created sculptures for the attic of the Obecní dům in Prague (the sculptures Drama, Music (Hudba), Humility (Skromnost), Nobility (Ušlechtilost) and more), a few years later he created the the sculptures Raftsmen and Rock climbers (Voraři a Pískaři) for Prague’s Mánesův most. In the 1920’s he concentrated mainly on monumental sculpture and memorial work dedicated to the Czechoslovak legion – Prague to its Victorious Sons (Praha svým vítězným synům), Design for war memorial (Návrh válečného pomníku), Now or Never (Teď nebo nikdy), The wounded Czechoslovak (Raněný Čechoslovák), Pro Patria, Victory of the Republic (Vítězství Republiky) and more.

The most valued period of his work is marked by monumental sculpture for architectural purposes.