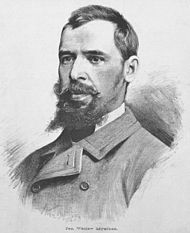 Josef Václav Myslbek, the founder of modern Czech sculpture, was born in 1848 in Prague to painter Václav Myslbek. He learned sculpting in the studio of Václav Levý, where he worked until 1870, at the same time studying painting at the Academy of Fine Art, as the Academy did not yet teach sculpting at that time. After returning from a study visit to Dresden in 1873 he married Karolina Brožová and opened his own studio. Myslbek took an interest in French sculpture, which he studied during a short stay in Paris in 1878, but the biggest thematic inspiration for his work was Czech patriotic literature. He worked with the ideals of the Czech national revival in mind, and the Czech painters and patriots Josef Mánes, Václav Brožík and Vojtěch Hynais were a great influence on his life and work. Myslbek is most famous for his work depicting idealized figures from Czech literature such as, for example, the statues for Palackého most bridge (Záboj a Slavoj, Přemysl a Libuše, Ctirad a Šárka a Lumír s Písní) and also for his realistic portraiture and memorials. Among the people he depicted are Bedřich Smetana ( In the foyer of National Theatre), František Palacký and Josef Hlávka. The most well known of Myslbek’s memorials are those of Karel Hynek Mácha on Petřín, and of F. L. Rieger in Riegrovy sady.

The pinnacle of Myslbek’s work, a piece on which he laboured from 1887 until in 1919, is the equestrian statue of Saint Václav for Prague’s Václavské náměstí complemented by statues of patron saints St. Ludmila, St. Vojtěch, St. Prokop and St. Anežka. The statue became a symbol of newly gained Czech statehood.

From 1885 Myslbek was a professor at the the Academy of Arts, Architecture and Design in Prague and from 1886 became professor at the Academy of Fine Arts, and thus influenced a whole generation of upcoming sculptors, such as Stanislav Sucharda, Bohumil Kafka, Otakar Španiel, Quida Kocián, Josefa Mařatka, Ladislav Šaloun and Jan Štursa.

Josef Václav Myslbek died on the 2nd of June 1922 in Prague, and was buried at Vyšehrad cemetary in the Slavín tomb.