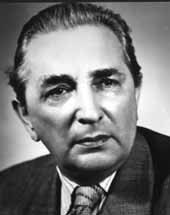 One of the foremost representatives of Czech sculpture of the first half of the 20th century, he was born in Pavlice u Znojma and studied locksmithing in Vienna. He studied at the Academy of Arts, Architecture and Design in Prague under professor Drahoňovský and at the Academy of Fine Arts under Josef Václav Myslbek, in whose studio he worked for five years after graduating in 1917, helping for example, on the statue of Sv. Václav for Václavské náměstí.

In his early work he concentrated on perfectly capturing the human form, as can be seen in Male Torso (Torzo mužského aktu), 1914-15; Female Torso (Torzo ženského aktu), 1918. After the First World War, under the influence of social art, he attempted to capture the harsh realities of life at that time. Some of his work shows echoes of cubism – Miner (Horník), 1928, the reliefs Industry (Práce), Humanity (Humanita), 1928, and more). His work later turned to historicism, and it was in this period that he created a series of monumental sculptures of prominent Czech personalities from the past and present.

His masterful technique and ability to convey drama brought historic themes to a modern audience.

He exhibited his work from 1918, both at home and abroad, and from 1920 was a member of the Mánes Union of Fine Arts. He taught modeling at the Czech Technical University in Prague and was a Professor at the Academy of Fine Arts, where he founded his own sculpting studio.

In the years 1948-50 he was rector of the Academy and chairman of the Union of Czechslovak Artists.

He achieved great recognition in his lifetime.